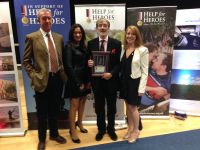 On Friday 18th October 2013 the Wings & Wheels team was delighted to be presented with a Help for Heroes, Hero award 'For Outstanding Support To Our Wounded'. Along with 30 other nominees, the team visited the Recovery Centre at Tedworth House in Tidworth, Wiltshire for an evening of contemplation and celebration.

Over the last five years Wings & Wheels has supported the fundraising efforts of the charity by helping to raise awareness and money as well as inviting members of the Band of Brothers and Band of Sisters to enjoy the press launch and Show.

Jim McAllister, Chief Executive, Dunsfold Park Ltd comments: "It was an honour and a privilege to be in the company of so many wonderful groups and individuals who have made such important contributions to Help for Heroes. We thoroughly enjoy supporting the charity, which has become an integral part of the Wings & Wheels team and we are proud to accept the award on behalf of everyone involved with the Show."

The Help for Heroes, Hero Awards were started in 2010 when Bryn and Emma Parry, co-founders of the Charity, wanted to recognise those fundraisers who had gone "above and beyond" in support of Help For Heroes. The Awards are treated like "The Victoria Cross" for the charity, not necessarily based on the amount of money individuals raise, more a reflection of the style, commitment and dedication of their support.

In an ideal world, Help for Heroes would want to award everyone who has ever done anything for the charity but it just isn't possible. Therefore, it was agreed that throughout a calendar year the Charity would nominate people for their outstanding achievements and in August of that year the list would be presented to the co-Founders to select a maximum of 50 winners who would be presented with a Hero Award from the President and Trustees of Help For Heroes at an awards ceremony, normally held in
October.

The Award Criteria is as follows:
• Individuals cannot be an employed member of staff (with the exception of being a part of a fundraising team)
• Individuals can only win ONE Hero Award
• You must be nominated by Help for Heroes and selected by the co-Founders

The 2013 awards were held at Tedworth House, Recovery Centre on Friday 18th October.

Wings & Wheels is promoted by Dunsfold Park Limited to assist the fundraising efforts of Brooklands Museum Trust and Help for Heroes.