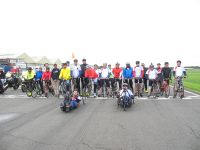 The cycling event, known as Soldier Ride UK (SR UK), began its six day tour on 6th October with the 30 strong team waved off from Windsor Castle by Her Royal Highness Princess Beatrice of York.

The cyclists, made up of wounded service personnel from the US and UK, came together on adapted bicycles and hand bikes to visit some of England's most famous attractions: Windsor Castle, Battle Abbey, Arundel Castle, Sandhurst, the North and South Downs and the Top Gear track at Dunsfold Park.

The cyclists covered 30-50 miles a day and were met on the final day by Francie Clarkson, manager and wife of Jeremy Clarkson, who jumped on her bike to join the team around the figure of eight Top Gear track in a show of support for BLESMA. The culmination of the cycle ride was a 'victory lap' from the Horse Guards Parade at Buckingham Palace to the Tower of London.

Jim McAllister, Chief Executive, Dunsfold Park Ltd, comments, "We were delighted to be included in BLESMA's inspirational cycle ride and only too happy to donate the use of the track to their cause. Amongst the many and varied uses of the Aerodrome, it makes a fantastic cycling track which the SR UK team from Britain and America seemed to thoroughly enjoy."

SR UK has run in partnership with the Wounded Warrior Project in the US for three years as they aim to raise £4 million a year in order to provide continued support for veterans.

BLESMA - The Limbless Veterans is the national charity for limbless serving and ex-service men and women, helping to rehabilitate wounded soldiers and providing invaluable support for their families. For more information on BLESMA please visit www.blesma.org