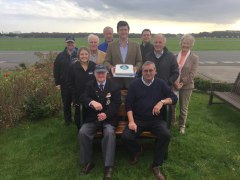 Dunsfold Park were delighted to help celebrate with Reg Day today as he marked his 95th birthday at the Aerodrome. On November 19th 1943, Reg celebrated his 21st and now, 74 years later, marks another special birthday.

As a guest of honour to the festivities, Reg was also joined by his son Peter, stalwart museum volunteers, Terry Bachelor and Owen Warren, friends, Kay and Mike Newnham, and Jamie McAllister and the Dunsfold Park team.

Overwhelmed by the celebrations, Reg commented, “The Aerodrome is my second home and I am very pleased to have been able to come and celebrate my birthday at Dunsfold with those who have supported me since I opened my museum. It was a great day.”

Reg celebrated his birthday with champagne, tea and a cake decorated with the No. 98 Squadron emblem, the Royal Air Force bomber squadron that Reg served with at Dunsfold between 1943 and 1944.

Reg returned to Dunsfold aerodrome in 2003 and since then, with the aid of Dunsfold Park, has set-up a museum of memorabilia which recounts his time during the Second World War as a mechanic on the B-25 Mitchell Bomber.

Dunsfold Aerodrome was an active airfield with many servicemen and a variety aircraft based at the site. Coupled with memorabilia of the War, the museum is a permanent commemoration of what occurred at Dunsfold Aerodrome. The Museum is available for all to see and is open from 10.00am – 3.00pm every Wednesday by appointment.