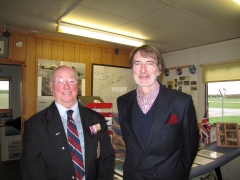 Dunsfold Park has donated a bigger building on the aerodrome to the museum which means more of the sizeable collection of wartime memorabilia can be on display and larger groups of people can visit the collection.

Joined by ex-wartime compatriots, museum volunteers and staff at Dunsfold Park Reg was also celebrating his 93rd birthday. As guest of honour at the festivities, Reg was joined by fellow veterans Babe Harwood and Peter Jenner and his stalwart museum volunteers, Terry Bachelor and Owen Warren.

Reg commented, "I am so happy to be spending my birthday on the aerodrome and with those who have supported me since I opened the museum in 2003. The new building is fantastic and we've been able to display so much more memorabilia for people to look at. The museum acts as a lasting tribute to those who served during the Second World War, and I am very grateful for all the support from Dunsfold Park in making it possible. I hope everyone comes for a visit."

Jim McAllister, Chief Executive, Dunsfold Park comments: "The nation owes a great debt of gratitude to men and women like Reg and I'm proud to be able to not only celebrate two momentous occasions with him, but support his museum which will ensure that the heritage of the site is not forgotten."

Reg celebrated his birthday in style on Dunsfold Park with a 'proper' English tea-party and cake before officially opening the new museum.

Reg returned to Dunsfold aerodrome in 2003 and since then, with the aid of Dunsfold Park, has set-up a museum of memorabilia which recounts his time during the Second World War. The museum is open at Dunsfold Park from 10.00am – 3.00pm every Wednesday by appointment.