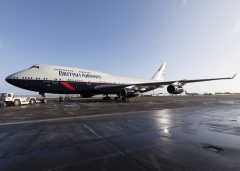 Dunsfold Aerodrome is delighted to confirm the retro-liveried British Airways Boeing 747 aircraft G-BNLY will be taking up residence on the airfield today, Saturday 5 December, where it will begin its new life as a TV and film set.

The retired British Airways 747 will depart from Cardiff Airport at 13:00*, landing into the Aerodrome in Surrey at 13:40*.

Since entering the British Airways fleet on 1 February 1993, the aircraft affectionately known as the Queen of the Skies, operated 14,016 flights and flew for more than 122,358 hours over nearly 60million miles. G-BNLY’s last passenger flight was from Cape Town to Heathrow on 22 March 2020. The aircraft also has the famous Landor livery.

Jim McAllister, Chief Executive, Dunsfold Aerodrome, comments: “With an aviation heritage that includes the development of military aircraft such as the Harrier, Hawk and Hunter, Dunsfold Aerodrome is the perfect fit for the generation-defining 747. We are delighted to have G-BNLY join G-CIVW and whilst the aircraft will no longer fly, they will be preserved and given a new lease of life in the world of TV and film, training and special events.”

Sean Doyle, CEO of British Airways, said: “The 747 fleet is not only a significant part of British Airways’ heritage but is also a cherished part of British aviation history. The aircraft holds special memories for the thousands of customers and crew who have flown her countless times around the world, so knowing that BNLY and CIVW will be in the care of Dunsfold Aerodrome for future generations to enjoy brings us enormous relief and a sense of pride.”

The iconic British Airways ‘Landor’ livery was designed by Landor Associates and used between 1984 and 1997. As British Airways prepared for the privatisation that would take place in 1987, a new livery and fresh corporate identity was created. A key part of the design was incorporating the best of British Airways’ past while being innovative and recognisably British. The quartered Union Flag on the tailfin was retained from the previous ‘Negus’ livery and the addition of the Coat of Arms against the midnight blue was promoted as a ‘touch of class’. The Speedbird symbol, that had been ever-present on British Airways and aircraft, was stylised to create the new red Speedwing; which was designed to become an integral part of the livery and synonymous with British Airways.

Please note that due to COVID-19 restrictions, the Aerodrome will not be open to spectators for the 747s final flight and landing.

*Time subject to change due to weather and servicability